The joy of index cards

Good [article in The Grauniad today about index cards->http://www.guardian.co.uk/lifeandstyle/2009/may/09/health-and-wellbeing]. 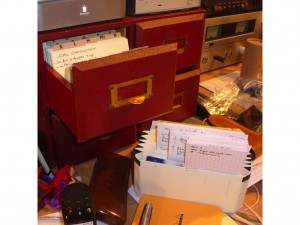 I have a fetish about these: I use them all the time for notes, memos, to-do lists, doodles, speaking notes – you name it. (I am particularly fond of a French brand called Exacompta which does really neat quadrille cards, but you can’t get them in the UK.) There’s something about their physicality, about the way that you can spread them out, shuffle them around, see the connections. As I move them around, as I trace a path, through, I find you can make all sorts of connections. I love notebooks as well, but you can’t spread a notebook out on a table and alter its sequence. (The photo shows the Page card index in all its glory.)

Still, I’ve got someway to go to challenge the Emperor of the Index Cards, German sociologist Niklas Luhmann. Luhmann (cited in the Grauniad article) developed [an intricate system of organising his information->http://takingnotenow.blogspot.com/2007/12/luhmanns-zettelkasten.html] and even went so far as to describe it as a collaborator in his work. Before the computer became ubiquitous, index cards were the tools of all academics and researchers. Indeed, I remember being really impressed when I went for my admissions interview for university in 1978 (I was a child genius) when the lecturer reached into his index card drawers and pulled out pictures and cards to do with the play we were discussing. (It was Marlowe’s The Jew of Malta – I can remember him showing me a picture of a sinner being lowered into hell. That is, the lecturer showed me a picture. Not Marlowe. Or the Jew of Malta.) 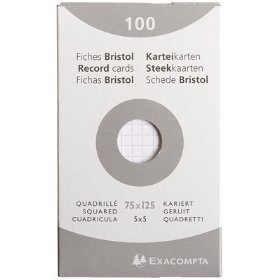 Anyway, after years of trying all kinds of digital equivalents – including a much-loved Mac outliner programme called 3×5 – I went back to index cards a couple of years ago. I still use digital versions (especially the magnificent [Scrivener->http://www.literatureandlatte.com/scrivener.html] which uses the Index Card metaphor to the full) but nothing gives me that same sense of organisation. And, anyway, I’m in good company. Famous index card users include Wittgenstein, Pirsig, Nabokov and Walter Bejamin, who wrote ‘everything that matters is to be found in the card box of the researcher who wrote it’.

Indeed, he described the card index as ‘ the conquest of three-dimensional writing’ which is more-or-less what I described above.