Among the books I’ve been reading over the break is the Aegypt cycle by [John Crowley->http://crowleycrow.livejournal.com/]. The books are sort-of fantasy/alternative history/magic realism – extremely difficult to classify! Anyway, one of the themes of the books is the way that history – even ancient history – is played out in the modern world. American presidents, for example, have to be aged 35 and over. Why? Because the Græco-Roman world thought that 35 (5×7) was the right age for someone to assume public office, and the American founding fathers, being classicists, decided to follow their example. Of course, in our time 35 is considered young; in previous eras it was advanced middle aged. 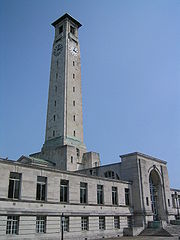 Anyway, for another working out of this I noticed this clocktower in Southampton. It was built in 1933, but its origins lie thousands of years earlier in the [Pharos at Alexandria->http://www.mlahanas.de/Greeks/Pharos.htm]. Curious to see a slimmed-down version of one of the seven wonders of the ancient world overlooking Southampton docks.

We just do things. We don’t know why we do things, or why certain beliefs persist. But so many of them go back to the Roman world, as it was rediscovered in the renaissance and beyond. So, in most cities and towns, you can find echoes of the past like this – a ridiculously tall tower, a beacon, a declaration that a provincial city in 1933 stood in a direct line to the great cities of the past.