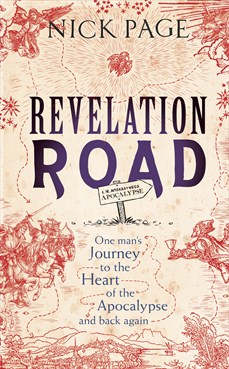 Heaven, hell, the four horsemen of the apocalypse, and why the end of the world never does turn up when it’s supposed to.

If you’re reading this, we’re still alive. The end of the world has not occurred. But it can’t be long now, can it?

For two thousand years, the Book of Revelation has inspired countless conspiracy theorists, film-makers, writers and artists, as well as theologians and teachers. But why are we so bothered? After all, the end of the world still hasn’t turned up, and it’s been quite a while now.

When Nick Page wanted to get to the bottom of what this mysterious book is really all about, he realised there was only one way to go about it: he had to go to the land of apocalypse. Travelling to Patmos via the ruined cities of the seven churches of Revelation, determined to seek out a revelation of his own, Nick explores the culture behind Revelation, who wrote it, why they wrote it, and what it means for us today.

Mixing history, commentary, creative reconstruction and sun-crazed travelogue, here at last is the (perhaps not quite) final word on heaven, hell, the four horsemen of the apocalypse – and why the end of the world never does turn up when it’s supposed to.