I’m a big fan of maps. Maps don’t just tell you where places are, they tell you where it’s possible to go. They can give you the direction, in all sorts of ways.

On the Thursday and Friday of the last week of his life, Jesus, according to the accounts in the gospels, made several journeys. First, he came in with his disciples from Bethany, over the Mount of Olives and, if the traditional site of the Last Supper is right, up into the Upper City of Jerusalem. The journey looked like this:

Then, between midnight and 2.00 a.m., he and the disciples went back again, out of the city and to Gethsemane: 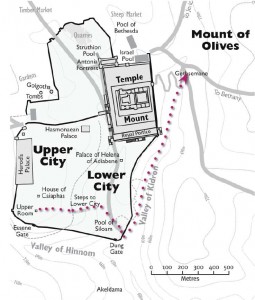 Finally, after his arrest he was taken back again, east to west, across to the upper City to the House of Caiaphas the High Priest: 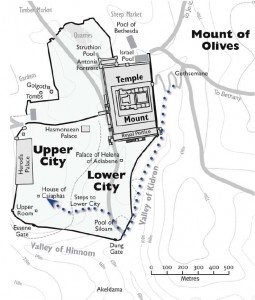 What strikes you is that the second journey – from the upper Room to Gethsemane – takes Jesus out of the city and very close to where the road goes east to Jericho. Twelve miles, downhill, would take Jesus out of Judean territory, out of the clutches of the High Priests and into Herod Antipas’ region.

In other words, to be safe, all he had to do was keep going.

But he didn’t. In the early hours of the morning, Friday 3rd April, 33 AD, Jesus stopped.

But he stopped. And prayed. And waited. because he knew that his real destination was in the other direction, on the other side of the city, on a rocky outcrop in a disused quarry which the Romans used for executions.

Someone once said to me that you will never know if Jesus is Lord, until you want to go one way, he wants you to go the other way, and you choose his way. To choose his way is to do as he did: to stop. To avoid the easy option of escape; to wash the feet of those you lead; to die the death of a slave; and to live in the hope of resurrection.

Jesus stopped, so that those who were looking for him could find him. Not just the temple police, but all of us, for evermore.