Holy Week around the world 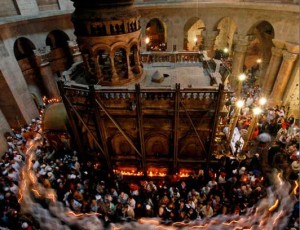 Catholic pilgrims and clergymen hold candles as they walk in procession around the tomb during the Easter mass in the Church of the Holy Sepulchre.

The Grauniad has a photo gallery of Holy Week processions around the world, including a huge number of Spanish pentitents wearing large pointy hoods.(There’s an older set of pictures here.)

Some of the penitent/flagellant stuff is on the morbid side of extreme, but we do well to remind ourselves that Christianity is a worldwide religion, and that this festival has been celebrated in many ways for two thousand years. In fact, maybe someone ought to have reminded Google of that whose Good Friday picture chose to celebrate the 205th birthday of Hans Christian Anderson. Well, at least they got ‘Christian’ in there somewhere.