The Codex Sinaiticus was discovered in 1844, in the Monastery of  Saint Catherine, at the traditional site of Mount Sinai (or to give it, its rather wonderful proper name, The Sacred and Imperial Monastery of the God-Trodden Mount of Sinai). The Codex (codex means ‘book’) is the earliest known Bible (although around half the Old Testament is missing). It dates from the middle of the fourth century (c.350 AD). 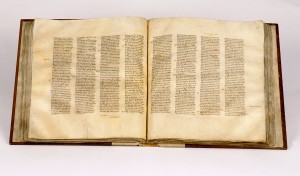 A spread from the Codex Sinaiticus

Pages from the Codex are in different places around the world: the bulk is in the British Museum, other sections are in Leipzig, St Petersburg and in the monastery itself. But now they are all back together through the magic of the Interweb. And you can see the pages here.

The significance of the Codex is not just its age. It’s the most extensively corrected ancient Bible. Corrections and amendments have been added to it from the fourth to the twelfth century and range from single letters to complete sentences. It shows how the Bible was not a fixed entity in the early centuries, but a somewhat fluid, developing, body of documents. When the Codex Sinaiticus was written, the New Testament was still being finalised.

A glance at the arrangement of the New Testament illustrates this. The order is different to our modern versions. Acts comes between Philemon and James. Hebrews is part of the ‘section’ containing Paul’s letters. More strikingly, there are two extra books: The Letter of Barnabas and the Shepherd of Hermas.

I’m working on a book about the history of the Bible – the text itself – which will come out next year. One of the things I really want people to understand is that the Bible did not fall from heaven, jiffy-bagged in some kind of angelic Fed-Ex delivery. It was the product of discussion and debate; its contents defining themselves across generations. Codex Sinaiticus shows that even as late as 350, entry into the New Testament had stil not been officially closed. 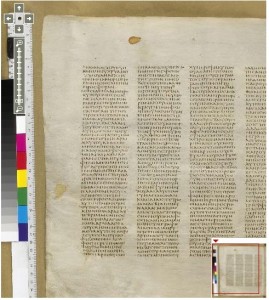 A page from the Epistle of Barnabas from the website

And it also illustrates that most Christians – up until fairly recently – had no access to a ‘Bible’ as such. The Codex is a big book. It’s the product of the latest technology of its time: its parchment leaves bound together using what the webiste calls an ‘advanced binding structure’. Early Christians did not have a concept, therefore, of ‘the Bible’ as we do – as a single, portable volume (unless you’re using the ESV Study Bible which needs a wheelbarrow to carry it around). Their scriptures were individual scrolls or codices. The Codex Sinaiticus is one of the earliest omnibus editions, bringing together what had been separate books into one bound volume. Its a 1650 years old Biblical box-set.