A Nearly Infallible History of Christianity 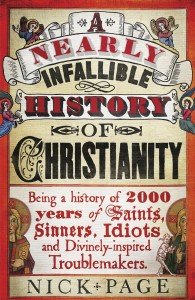 Accessible, informative, provocative and very, very funny, A Nearly Infallible History of Christianity is a history of the church for the rest of us.

Why do Christians believe the things they do? Who wrote all those creeds? Who invented excommunication? Why is Christmas on the 25th December? What does the invention of trousers have to do with the fall of Rome? And was Pope John Paul I really named after one half of the Beatles?

From Abelard to Zwingli, Nick Page brings you all the saints and sinners, holiness and heresy – not to mention several donkeys, one elephant and a prophetic goose.

Combining in-depth research, searing historical analysis, and cutting-edge guesswork, this is the story of how the church survived, despite the people who led it.

Here is everything you ever wanted to know about Christian history. And quite a lot you never realized you wanted to know. Not to mention some more stuff that you would rather not have known in the first place.

It’s funny. It’s fascinating. It’s always informative. But, like the church itself, perhaps not entirely infallible.

“I was predestined to read this.” John Calvin.

“I felt my heart strangely warmed. Or it could have been indigestion.” John Wesley.

“Nick Page has it all wrong. I’ve said it before, I’ll say it again: all our intellligence told us the Saracens had weapons of mass destruction.” Pope Urban II, inventor of the Crusades

(And some actual  reviews…)

‘Nick Page’s books are always thoroughly researched and engagingly written, and this one is no exception.’ (The Good Book Stall)

Nick guid[es] us through the history of the Christian church in his slightly irreverent and humorous way, providing unique insights. (Together Magazine 2013-10-13)

Nick Page has done it again. Another cracking book professing to be humorous, silly and light- hearted, whilst really being intelligent and erudite… this book is the perfect starter book for anyone who needs to know something about church history, actually wants to understand what they are reading, and the reasons why it was so important… Add into this the great section headers, cartoons and other ephemera within it and you have a cracking gift or enjoyable read for anyone who wants to know just a little more. (Together2013-12-13)

Nick Page’s Nearly Infallible History of Christianity is a sort of Horrible Histories brought to bear on belief. Like that popular series, its tone is light and breezy… [a] fertile, inventive, and imaginative pen. (Willian Whyte The Church Times)

Written in a chatty style designed to invite people in to share the authors fascination with his subject, and to keep them intrigued with the use of jokes and funny illustrations, this is, in fact, quite a serious history, in spite of itself. (Editor’s Choice The Good Book Guide 2013-12-01)

Written in a chatty style, this is a serious look at the long and tangled history of Christianity, its saints, martyrs, Crusades, writers and thinkers. (Bestsellers The Good Book Guide 2014-03-27)

I’ve read many books on Church History, but this is the first which made me laugh out loud – on several occasions. […]. [I]f you like ‘1066 and All That’, you will relish it and the footnotes can be deeply thought provoking. (Bestsellers The Newspaper 2014-04-01)

‘A Nearly Infallible History of Christianity’ is an accessible, provocative and very funny history of the church. (Jumoke Fashola BBC Radio London 2014-05-04)