A Debt of Honour

In April 1982, I bought a book in the University of Warwick’s bookshop. It was called Debts of Honour and it was written by Michael Foot, then leader of the Labour Party. I’ve just retrieved it from the shelf. It’s a collection of essays about Foot’s heroes – from his father Isaac Foot, to the essayist William Hazlitt; from the Tory Newspaper magnate Lord Beaverbrooke to the radical’s radical, Tom Paine. It’s a brilliant book, fizzing with insight and the passion of a man talking about people he really admires. What it illustrates is the essential humanity of the man. Can you imagine a modern day politician writing in praise of someone of entirely the opposite political opinion? In fact, with a few notable exceptions, can you imagine a modern politician writing anything very interesting at all? 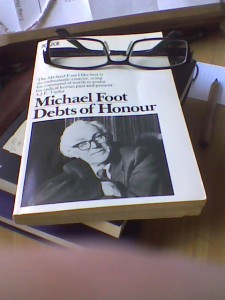 The book contains one of Foot’s best lines: “Men of power have not time to read; yet men who do not read are unfit for power.” Michael Foot, for all his reading, never achieved much power. Foot was a journalist and a politician, a writer for the left wing weekly Tribune in its 1940’s heyday, when the contributors included Raymond Postgate and George Orwell.
It was Foot’s glory and misfortune to be the last party leader before the spin took over. There has always been spin in politics, of course, but at that time it was just beginning its rise to power. Foot believed in principle before power. The Labour party manifesto may have been ‘the longest suicide note in history’ but it was a note based on principle, most notably the principle that everything in the manifesto had been voted for at the party conference. Things like nuclear disarmament and nationalising large parts of industry weren’t in there because he thought they would bring him to power, but because he believed in them. He wasn’t interested in what was expedient, but what he believed to be right.

He was the first political figure – at least the first one I recall – to be ridiculed by the media purely on the grounds of his appearance. He always looked like he was fighting a losing battle with his clothing. He didn’t so much wear a suit as move about at odd angles inside it. But he believed, stupidly enough, that people would be able to look beyond the suit. Sadly, though, he was dealing with papers like the Daily Mail.

I heard a story on one of the many tributes that the Tories had identified his rather eccentric appearance as a potential weak spot. They ‘let slip’, when Callaghan fell, that the person they feared most as the replacement was Michel Foot, because of his statesman like abilities. In fact they wanted Foot, because they knew that the media would have a feeding frenzy. They got what they wanted.
Today politics seems increasingly about winning power, rather than winning the argument; it’s about presentation more than principle; it’s about whether someone looks like a leader instead of whether they can actually lead.

Would he have made a good PM? I don’t think so. Certainly at the time I didn’t believe he was right. I supported the breakaway SDP. I’m more radical now. (As a Christian, I doubt somehow that Jesus is a big fan of nuclear arms. Back then, in some ways, I was a lot older than I am today.)

There was always something of the Old Testament prophet about Michael Foot – ironic, since he was a dedicated humanist, much to the regret of his parents who were staunch teetotal Methodists. Debts of Honour opens with a wonderful essay about his father, including a speech of his father’s during the war, where he predicted that, if Hitler were to invade, he would meet face ‘the land of William Tyndale and John Hampden and Oliver Cromwell and John Milton – the Britain of Marlborough… and John Wesley, of Chatham, and Burke, and Thomas Paine and Charles James Fox.’

You can see where Michael got his powers of oratory from, for whatever else he was, he was a great speaker. I’ll end with an excerpt from a speech he gave before the 1983 general election, which shows him in full, prophetic flow:

“We are not here in this world to find elegant solutions, pregnant with initiative, or to serve the ways and modes of profitable progress. No, we are here to provide for all those who are weaker and hungrier, more battered and crippled than ourselves. That is our only certain good and great purpose on earth, and if you ask me about those insoluble economic problems that may arise if the top is deprived of their initiative, I would answer, ‘To hell with them’. The top is greedy and mean and will always find a way to take care of themselves. They always do.”