The Fig of Eden

There’s a fascinating [article in today’s Independent about endangered trees in Kazakhstan->http://www.independent.co.uk/environment/nature/death-in-the-orchard-of-eden-1681057.html]. Apparently, the original versions of the apple, the apricot and the walnut are all found in this area – the historic ancestors of the varieties we all enjoy today. (The original apple is called Malus sieversii and the apple gives its name to Kazakhstan’s former capital city – Almaty, means ‘Father of Apples’.) Claire has just described this as ‘the fruit equivalent of the Turin shroud.’

Anyway, the story – of course – links this with Eden and the apple tree that stood there. Or, rather, didn’t. Because the Bible never says which fruit it was. Here’s what I wrote in the Bible Book: 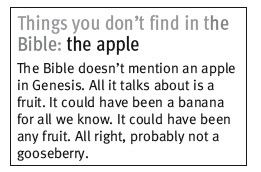 Anyway, the Bible story places Eden in Mesopotamia, somewhere in modern Iraq or Iran. But then I thought, ‘where does the whole apple thing come from then?’ It’s not in any of the Bibles – certainly not in the King James.

A rather wonderful webpage called [‘Great Moments in Apple History’->http://www.hort.purdue.edu/newcrop/maia/history.html] dates it to 1470 and the appearance of an apple in a painting of Eden by Hugo Van Der Goes. Because Hugo painted it as apples, according to the website, demand for apples among Christians plummeted. This is a seriously, disturbingly weird picture (get the serpent/human/strange weasel being. And note the strategically placed iris. That’s what I call clever planting.).

But actually, apples appeared in Christian art earlier than that. There are, apparently, early Christian tombs and sarcophagi with apples on them, so it dates back much farther than the apparently disturbed Hugo.

I suppose if you want to look for a more likely culprit, then the fig tree is the obvious suspect – the next verse mentions them sewing fig leaves together to make primitive clothing.

It’s probable that the identification goes back to western Christian scholars who knew Latin, because the Latin word for apple – malus – is similar to the word for evil – malum. (And they’re identical in the plural – mala.) And this would also have linked in in their minds with the Greek myth of Eris throwing the apple of discord around at a wedding party.

So, I suspect that it goes back to one of the early Latin versions such as [Jerome’s Vulgate->http://en.wikipedia.org/wiki/Vulgate]. And it also accounts, of course, for the reason why we call the lump in mens’ throat the Adam’s apple. Because eating it, literally, stuck in his throat.