If you thought the Mont Blanc Gandhi Pen was spectacularly ill-judged, then prepare to applaud Leica for their three limited edition cameras to celebrate the 60th Anniversary of People’s Republic of China.

The camera body has ‘Mao Zedong front type’ and a ‘Tiananmen Square pattern.’ (I don’t know what that pattern looks like. Bloodstains, perhaps?) 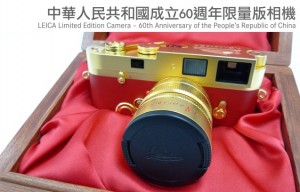 Nothing says ‘We applaud you, home of brutal media crackdowns’ better than a special edition camera. What better way to commomorate China’s fine, nine year reign as the world’s biggest jailer of journalists? Just grab your trusty Leica and head out onto the streets of Beijing and start snapping away.

(Only not in Tiananmen Square, obviously.)