Just the three new Bibles then…

Taken delivery of three new Bibles over the past couple of weeks. 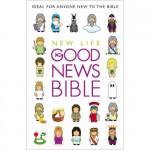 The first is the Good News Bible New Life Edition which has rather funky little characters.they remind me of Japanese toys. Adam and Eve make me laugh. not so sure about the Holy Spirit character though. The Bible contains some material I wrote – introductions to the main characters, timelines, etc.

The second Bible is a new NIV edition, for which I have designed new colour maps for the front and end-papers.The type-design for this version is really lovely: clear, clean text. It could do with some more helps, I think. The intros to the books are tucked away right at the back. (But the maps are gorgeous!)

So, those two, I get sent. The third, I bought. It’s the NIV Archaeological Study Bible . I bought the ‘portable, personal-sized edition’. Which is ‘portable’ in the same sense as a mobile home is portable. In theory it’s possible, but in practice you’re better leaving it in one place.

The material seems to me to be pretty good, although, as it comes from a conservative standpoint, it does tend to dismiss some arguments rather too easily. For example, an article on The Patriarchal Period, ends with the line ‘There is no evidence that should lead scholars to question their [the Patriarchal narratives] authenticity.’ Which is really way too dismissive. There’s a lot of evidence that supports the accuracy of the setting, but that’s a long way from proving them ‘authentic’. I happen to think that there is a lot of authentic material in there, but I don’t think that easy dismissals are a good way of proving your case. And it would benefit from an article outlining the history of Biblical archaeology, unless I’ve missed it somewhere.

My other caveats about this version are really to do with design. The maps are pretty useless. For a start they’re at the back, rather than places alongside the sections where they’d be useful. Secondly, they are horribly designed. Thirdly, there are nowhere near enough. No ancient city maps as far as I can see. No diagrams of the Temple.

The typeface is small and nowhere near the elegance of the NIV mentioned above. The most annoying thing, though are the text pages, which all have a kind of faux-antique look. [You can see what I mean here.->http://www.google.co.uk/url?sa=U&start=1&q=http://www.archaeologicalstudybible.com/&ei=qbDpSdzBCdLLjAe-ucGbCg&sig2=DVvOskhpydV4Jt1leu-99w&usg=AFQjCNF7OOyxSQHIg7DqX5drgl6rIB_8Dw] The articles and features have a fake ‘scroll’ background and the ‘cultural and historical notes’ have a header featuring an Arab on a camel, silhouetted against the desert son. Not only does it look like a rather naff Discovery channel graphic, it just gets stupid when you get further on into the New Testament and you find the same camel, the same Arab, topping an article on Nero.

I’m not against fake backgrounds. I’ve used them myself and if they are done well, they can be really effective. But if you’re going to use a fake background, the text has to work as well. Here we just get modern sans-serif typeface on a fake ‘parchment’. It’s clichéd. It just lacks imagination.

And the real point is that it’s just so unnecessary. It actually works against the credibility – not to mention the readability – of the text. They make it look a bit tacky. And they make us look a bit stupid. ‘Look’ the book screams. ‘The Bible is really old. And archaeology is all about old stuff. And to prove it we’ve made the pages look old!’

(It’s also a really bad waste of space. Each header is 2cm high. At 500 notes that 1000cm of pointless Arab/camel/sunset stuff. If you’d cut it by half you could have saved around 25 pages.)

Having said that, this is an excellent, well-resourced Bible and if you’re interested in the history there’s nothing else quite like it. The aricles could have been a bit more in-depth, but there’s always a balance between producing a Bible and a Bible Encyclopaedia. It’s heavy enough as it is.

And, whisper it gently, but [some of the contributors are women->http://www.nickpage.co.uk/?p=225].