One of my most treasured possessions is my old Sansui A40 amp. I bought it in 1980 with my student grant cheque – remember them? I think it cost me about £40 which was a big chunk of money in those days. Joined it up with an old Garrard 2P-25 turntable and some home made speakers. I remember taking it back to where I was staying and playing the drum solo on ‘In the Air tonight’ so loud that the speakers fell off the shelf. Thirty plus years later, it’s still going strong (although the light not longer works). It’s a fantastic bit of kit.

Anyway I’ve just seen the very retro looking Stereolizer radio app for the iPad which matches my old amp perfectly. Even with a cassette deck interface for your own recordings. Takes me back to the days when I used to record the top 40 and try to start and stop the recording before you got the DJ’s voice. Of course, the interesting question is why you want an analogue interface on a digital device. Like those people who put an old-fashioned telephone bell on for their ringtone. Maybe we’re not as comfortable with the digital world as we imagine. 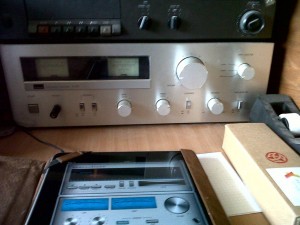 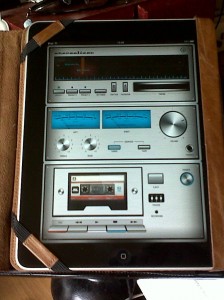