I love my village, but about once a month I also get to go up to London. If I’m lucky I’ll have some time just to wander the streets and explore, something I’ve been doing since I first went into the city on my own as a kid. (I think I must have been about 13 at the time. Not sure I’d allow my daughters to do the same today!)

Anyway, there are two wonderful love letters to London by the film critic Roger Ebert. One’s reprinted in the Guardian and is a hymn to Jermyn Street – a street I know well, since it takes me towards St James Square, home of the London Library, one of my favourite places on earth. (And Geo. F. Trumpers shops sells Limes cologne which is like rubbing half a citrus fruit on your face. But nice.) The other piece, on the joys of perambulation, is here and contains this wonderful description of a banger (as in ‘bangers and mash’): ‘Made of fat, cereals and allegedly some meat.’

Indeed, just wandering round London always brings surprises. Last summer I re-read Moby Dick and, much to my surprise, discovered it to be one of the greatest books ever written. A few weeks later, back in London, I was walking down towards the embankment when I made another discovery: 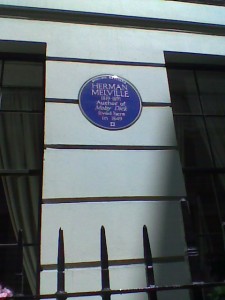 Serendipity. Another great reason to just enjoy wandering around.

Typically, some adherents have tried to claim more for this kind of wandering, and given it the name ‘psychogeography’, drawing on links to De Quincey’s drug-fuelled nocturnal perambulations and the similarly hallucinogenic writings of Iain Sinclair. I like Sinclair’s work: he’s a great stylist, and he fills every encounter with a kind of intense, meaningful significance, but really it’s still just having a wander.

Another more extreme form of wandering is the urban explorers movement, whose adherents try to enter all those strange, abandoned spaces that litter our towns, cities and countryside – the places where no-one lives or works, but where there are always signs saying ‘Keep Out’. There’s a forum here full of UK examples. I first found this forum when I was looking for information on the huge building just north of Oxford. Turns out it’s a disused grain silo. Now going into those places really must be a haunting, hallucinatory experience.