And so we get to the big bombshell of the election and it’s this: Gordon Brown said something nasty about someone when he thought she wasn’t listening.

Good grief. Is that it? Is that really what will decide this election? It’s a curious thing but for most of history ordinary people have assumed – rightly in most cases – that their leaders are villains, and have been pleasantly surprised when it turns out to be not the case. Nowadays it appears to be reversed: we assume our leaders are superhumans and are shocked when it turns out that they’re just like us. It’s political reporting turned into gossip columns.

Here’s what we should be celebrating this morning: we have a political system where our leader can go out and get ranted at by a woman out buying bread. Our liberal democracy may have its faults, but I can think of plenty of other places where the leaders would never walk among the people, and where anyone talking to their leader like Mrs Duffy did would find themselves in the back of a van heading to jail, or worse, lying in the streets in a pool of blood.

Grow up. The hypocrisy over this is astonishing. Journalism is a profession which routinely and systematically says things about people which they would never say to their face. The internet froths and bubbles with the snide comments of anonymous bloggers.The world is awash with people who say rude or unkind things about their friends, relatives and others – things which they don’t really mean, and which they would be mortified if they were overheard. Go look in the mirror. If you like what you see you can cast the first stone.

All this latest event proves is that Gordon Brown’s human. There are plenty of other reasons not to vote labour. Notably a catastrophically ill-judged war and the fact that the very people who caused the world economic crisis seem to be the ones who have profited most from it. But hey, let’s not worry about that. Let’s focus on Rochdale, where an ordinary housewife gets called a name by a man under pressure.

In the meantime, the Grauniad has a wonderful collection of alternative election posters. It comes, broadly, from the leftist leanings you’d expect from the paper, but it’s very funny nevertheless. Here’s my favourite: 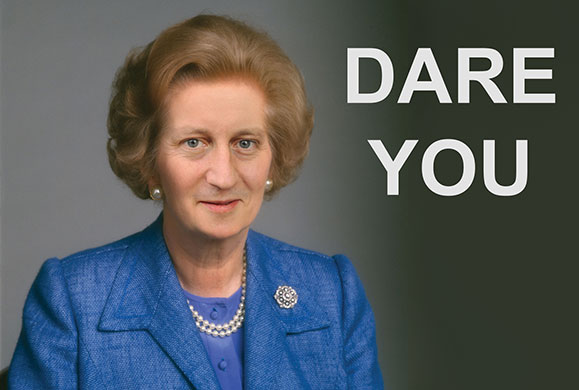