I remember when I first became aware of Clement Freud – he was doing dog-food adverts on TV which relied for their effect on the similarity between his face, and that of the blood-hound, Henry. But, for me, what turned him from a TV personality into a full-blown hero, was hearing him read Grimble on Jackanory. 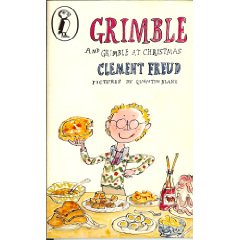 Grimble is one of the funniest children’s books ever. Actually, forget the ‘children’ bit, it’s one of the funniest books ever. My puffin copy, illustrated by Quentin Blake, has been read and re-read many times. It tells the story of a boy called Grimble who arrives to find that his parents have left for Peru and he has to fend for himself. His parents send him helpful telegrams, like this one:

“When he opened the door he saw a telegram on the mat. It was addressed to him. He opened it carefully and read the message: SENDING TELEGRAM TOMORROW. LOVE FATHER AND MOTHER.”

The next day he duly receives another telegram which runs:

Sheer genius. I also heard him some time back on a radio 4 programme, during which he told the following, wonderful story:

I was for six years rector of the University of Dundee. As rector, one would chair the court of the University. There was one occasion when a physics student came to us with a complaint. He had, in the course of his final year physics exam been asked a question. He had been asked ‘How would you guage the height of a skyscraper, using a barometer?’

He had answered that he would take the barometer to the top of the skyscraper. He would tie a piece of string to it, and lower it to the ground. He would then measure the elapsed string, add the length of the barometer, and that would be the height of the skyscraper. He was failed for showing a total ignorance of physics. He appealed to us on the grounds that he had given a correct answer and received no credit for it. And the marks were important to the quality of his degree.

We considered, and then accepted he had a point and so appointed an external examiner to ask the question again. When the examiner met him, he said to the student ‘You’ve had plenty of time to answer it, so come on what is your answer?’

The student said, ‘It isn’t as simple as that. I could of course go to the top of the skyscraper, and drop the barometer. And then with an accurate stop watch record the length of time taken for it to hit the ground and then, bearing in mind the falling speed of the object, I could give you a pretty good idea of what the height of the skycraper is. Or, and this is I imagine what you had in mind, I could measure the barometric pressure at the top of the building, and then again at the bottom. But on consideration, what I think I would do, would be to go to the janitor and say to him, “If you tell me the height of this skyscraper, I will give you a barometer.”‘