Ten things you need to know about the King James Bible

There’s a full on King James-fest at the moment, a celebration of the 400th  anniversary of the KJV. 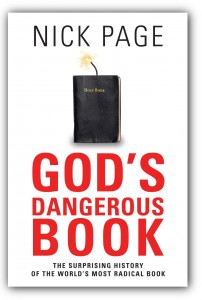 Amidst all the literary luvvies gushing over the quality of the prose and the RADA trained voices reading it in Radio 4 speak a few salient facts aren’t getting much attention. So here are ten things you ought to know about the KJV. They are taken from God’s Dangerous Book – a book on the history of the Bible which I have coming out later this year. And the good news is, you can download the chapter on the King James for free.

But here’s the shorter version:

Ten things you need to know about the King James Bible

2. It was never intended as a means of giving the Bible to the people: it was intended as a way of stopping them using the Bible they already had. The people already had a great English translation  – the Geneva version. James I hated that because he thought its footnotes were seditious. So he specifically commanded that the new version should be done without footnotes.

3.  It was a revision not a new translation. James ordered that it be based on the text of the Bishops’ Bible of 1568. James instructed that the new version was to be ‘as little altered as the truth of the original [i.e. the Bishop’s Bible] will permit’.

4. It was a politically motivated translation. James also instructed that ‘the old ecclesiastical words to be kept, viz. the word Church not to be translated Congregation.’ James insisted that ekklesia be translated as church and that the word ‘bishop’ be used instead of ‘elder’. So you get verses like Acts 1.20, where the Geneva Bible has

For it is written in the booke of Psalmes, Let his habitation be void, and let no man dwel therein: also, Let another take his charge.

For it is written in the book of Psalms, Let his habitation be desolate, and let no man dwell therein: and his bishoprick let another take.

It is difficult to imagine the writer of Psalms ever had in mind someone taking over a bishopric.

5. It’s a sanitised version. The Geneva Bible uses the word ‘tyrant’ over four hundred times to describe wicked kings and emperors. But you won’t find the word at all in the AV. It’s the king’s Bible – how can a divinely ordained monarch ever be a tyrant?

6. It was designed to be the preserve of the clergy and church. It was a lectern Bible – a massive book designed to be kept in a church and read to you. The Geneva Bible had tons of footnotes and introductions and maps and charts – it was the world’s first study Bible. The AV had nothing except a lengthy preface and then the lectionary. The powers behind the AV didn’t want the people to read the Bible: they wanted it read to them.

7. It was the world’s first mock-Tudor Bible. The language is undeniably beautiful. But it is deceptive. The translators of the AV upgraded the language of the original. The translators chose – created, really – a style of language which was not one spoken in Jacobean England: which, indeed, had never really been spoken by anyone, at any time. They were deliberately archaic. They used terms and phrases which were already out of date in 1611. Anthony Johnson, writing less than ninety years later stated that the absence of notes from the AV led to complaints from some readers that ‘they could not see into the sense of the Scriptures.’

8. It’s mainly the work of Tyndale. The AV is still, primarily the work of the great William Tyndale. At least 83 per cent of the New Testament comes from Tyndale’s translation and 76 per cent of the Old Testament come from Tyndale’s work, with the AV translators just adding that sheen of impenetrable Jacobean literary bling. The AV has majesty and stateliness. But Tyndale has a levity, a homeliness which is entirely absent from the AV. According to Tyndale, ‘The Lord was with Joseph and he was a lucky fellow’; according to the AV ‘the Lord was with Joseph and he was a prosperous man’ (Gen. 39.2). See what’s happened? Joseph’s gone up in the world. Just like the Bible.

10. It succeeded because other versions were banned. The Geneva Bible continued to sell – and in huge numbers. Indeed, it proved so popular that in 1616 the King was forced to ban the printing of the Geneva Bible by any English press. Although people continued to import copies, eventually the ban worked and the AV became the default English translation. Without any serious competition, its sonorous, beautiful, fantastic prose wove itself into our culture.

Here’s the conclusion from the chapter in God’s Dangerous Book:

Its privileged position means that the AV has taken on a symbolic value. Just as everyone loves old English churches, but fewer and fewer go to worship, we cherish the AV, but hardly anyone reads it. A copy of the AV is what every household has, along with a dusty volume of the complete works of Shakespeare.

This is why the AV is the non-Christian’s version of choice. It allows them to enjoy the language without having to obey the thing. Because, deep down, we want a God with a big white beard and a nice line in Jacobean poetry. We don’t want a God who talks in the language of tradesman’s Greek; a God who sounds like a shopkeeper or a housewife or even a carpenter; we want a God who sounds old and ancient and mysterious. The logical conclusion of this is the mind-bogglingly stupid statement of Charles Allen Dinsmore, who declared the AV to be ‘a finer and nobler literature than the Scriptures in their original tongues.’ As the Cambridge History of the Bible puts it, the AV’s text ‘acquired a sanctity properly ascribable only to the unmediated voice of God.’

Why do we love the King James Bible? Why did it come to dominate our culture?

Because it sounds better than the original.

To find out more, download the free sample chapter.